Yes – it’s that time of year again! … April is my birthday month, so I have chosen it for fundraiser time.
For those not familiar, this is how the $1 goes …

As there are hundreds of lovely people from all over the world on the Cilla Vee Life Arts mailing list, the theory is that if everyone donates just ONE DOLLAR, then it’s nothing from each individual’s pocket – yet a fantastic fundraiser for CVLA!

All you need to do is …
1. Put a $1 bill in an envelope (a little personal note to sat “hi” would also be so nice!)
2. Mail it to:
Cilla Vee Life Arts one-dollar fundraiser
Claire Elizabeth Barratt
65 Coleman Ave,
Asheville NC 28801

For any wonderful, kind, generous souls who wish to donate $5 or more, it would be safer to mail a cheque – please make it out to Claire E Barratt.
You can also go to the CVLA website and click on the donate button there.
Click on this link for CVLA homepage: http://www.cillavee.com/

I am also running a GoFundMe campaign - “Art Skool in Berlin!” to raise travel and accommodation expenses for my MFA GRADUATION with the Transart Institute in Berlin this summer.
Click on this link for more information: gofundme.com/czw2f57d

I am currently finding a way to incorporate all Cilla Vee Life Arts projects into my MFA thesis project! This is achieved through the RAW-(Material) project.
The RAW-(Material) project explores how the raw materials of the self & of nature & the environment can be used as mediums with which to create art.
Click here for a fun example of this with Hay Bales in the Nottinghamshire countryside: https://youtu.be/6x2tudb7rJ8

Interlude is a whole series of events & happenings taking place around downtown Asheville NC during the month of April. It is produced by Black Mountain College Museum + Art Center, in collaboration with MAP (Media Arts Project)
Click here for the Interlude website: http://www.interludeavl.com/

RAW-(Material): Earthday is a durational performance installation from 12 noon til 12 midnight. Nature’s springtime will be gathered from the Western North Carolina mountains & arranged to create a living environment at Henco Gallery – where performers will respond & interact with movement, sound & word.
Click here for more information about this event: http://www.interludeavl.com/cilla-vee/ 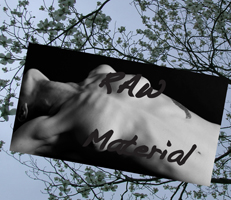 Weaverville Yoga studio (where I teach Ballet) will generously be hosting my final MFA project presentation in May. The weekend will include a dance & music performance, a movement workshop, a video screening and a multi-media art installation.
Click on this link or the Weaverville Yoga website: http://www.weavervilleyoga.com/

CMD in Knoxville TN is a company I was part of founding & directing when I first moved to the USA in the early 90s. It is still going strong & currently celebrating its 25th Anniversary year! As part of the anniversary celebrations, the founders are being invited back as guest artists. In December I performed in their annual winter production Modern Dance Primitive Light & earlier in March this year I spent a weekend with the company teaching “Living Art” workshops and creating a structure on which they will develop a performance piece.
The core company members will present the final piece for their big fundraiser on May 19th.
Click here for the CMD website: http://circlemoderndance.com/
Click here to see one of the solo RAW-(Material) pieces from the MDPL show: https://youtu.be/8GkUloUe4ek

This February was spent in blissful solitude on Deal Island – Maryland’s Eastern Shore. I had a month-long residency at the John Cage Memorial Park in Chance MD – which is owned by the fabulous Gladdens – Tara & David, who both work at Salisbury University and are greatly instrumental in creating a contemporary avant garde art & performance scene in their community.
There, I continued to work on the RAW-(Material) project in response to the Chesapeake Bay environment in mid-winter.

I also had the opportunity to collaborate with Tara & David in a multi-media performance at their album (yes vinyl!) release party “Transmissions”. 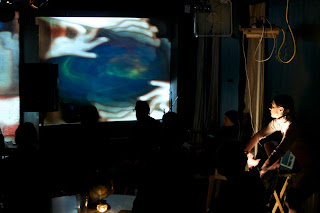 For this performance, I was able to use some studio studies I had been exploring on the subject of Hands.
Click on this link to see these studio Hand meditations: https://youtu.be/h93xOmzB0MI

And click on this link for an example of how they were used via live-feed video in performance:
https://youtu.be/YwSAXnQXYZU

Oh what would we do without XFEST?
This creative chaos of a festival has been going for eight years now! Walter Wright of Gallery 119 started the festival in Lowell MA in rebellion against the local annual folk festival. For the past three years, Holyoke MA has hosted XFEST.
Every year in the brutal New England winter, a multitude (2016 saw 80) of musicians, dancers and video projection artists invade the place and perform a series of improvised collaborations – you just never know what’s going to happen … especially with the crazy characters involved! FUN!

Posted by cillavee at 5:48 PM No comments:

This Newsletter serves as a personal catch-up session with my friends & family - rather than my more formal Cilla Vee Life Arts letter to my whole mailing list ......

I am about to begin my final semester as an MFA candidate with the TRANSART INSTITUTE.
During this time, I must not only complete & present my artistic project to the public - but also to write a project thesis defending its validity in the world!

My project addresses the concept of the Self as a "raw material" with which to create.
The performer uses the Self as medium / Self as instrument for the art of performance.
Therefore - my project is appropriately entitled "RAW-(Material)".

I have been creating it in the form of a journal - with text, video, image & sound pieces documenting my artistic practice-as-research into explorations of the raw materials of the Self .... as well as interactions with the raw materials in the environment around me.

This involves various forays into nature ... falling around in wheatfields, picking apples in ancient orchards, perching precariously on the sides of mountains etc ... !

As well as creating a video piece with my nature material interactions, I then take the gestures that evolve from those interactions back into the studio & develop them as choreographic motifs that can be used in live performance.

Here are some examples:


In the wheatfield, my instinct was to fall into it ... it seemed to be inviting me!
Once in the studio, I took these same falling actions & then developed them further - until it became an almost violent act of throwing myself onto the floor!
With the autumn leaves, I saw them spinning as they fell off the trees & onto the ground. I wanted to imitate this action with the camera & it became a dance - spinning & swirling with the camera to capture the dance of the leaves.
On taking this into the studio I applied these motions to my whole body.

I am spending time in different places during each season.
Summer in Berlin, Nottinghamshire UK at harvest time, Southern Appalachia USA in the autumn ....
Next I go to the Chesapeake's Deal Island for the dead of winter!
Here I have a month-long residency/retreat at the John Cage Memorial Park in Chance MD ... it's quiet & remote. I'm looking forward to wintery sunsets overlooking the bay.

I am currently running a fundraising campaign entitled "BOOKS GEAR & TRAVEL" - which is quite self-explanatory!
THANK YOU so much to those who have already contributed ..... this letter serves to inform you a bit as to what your donations are going towards.
If you would like to know more - HERE IS THE LINK: 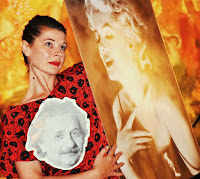 Thank you for spending the time to read this & catch up with me.
Please do get in touch & keep me posted on YOU!

Look forward to hearing from you.
Warmest wishes for cold winter days (unless you're near the equator or "down under"- in which case - Happy sunshine!)

Posted by cillavee at 2:33 PM No comments: