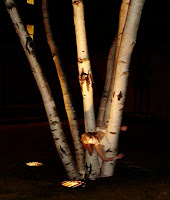 Dear friends,
I hope the end of Summer is finding you well & in good spirits.
Much of my Spring & Summer has been spent traveling.

“That From Which”
In May, I spent a week in Lowell, Massachusetts (hometown of Jack Kerowack ! – just outside Boston) I was invited to be part of a multi-media project with SPIRAL7, directed by composer & technical designer Philip Lampe. The piece is entitled “That From Which” & is based on the philosophies of Ernst Bloch. The set was an installation of hanging translucent fabric strips, through which video projections hit each layer, creating a perspective of extreme depth. The scenario was of a life journey, a passage through phases of human emotions. Together with percussionist Grant Smith & clarinetist Glenn Dickson, Philip composed a score blending world instruments with electronic sound. My role as movement artist was to portray the human element. The organic – juxtaposed, yet interweaving with technology & texture. The venue was a place close to my heart – Gallery 119, run by the very dear Walter Wright & Mary Ann Kerns. “That From Which” is both a performance & a video piece. The video will be available in the near future.

ADF
In July, I had the opportunity to perform at ADF – the long established mainstay of American modern dance “American Dance Festival” on the Duke University campus in Durham, NC. Artist Lara Hanson, a good friend & collaborator I worked with in New York, was the designer for this years festival T-shirt ! She had an exhibition of her work in one of the campus galleries & asked me to perform at the reception. Lara works within a performance, capturing a dancers gestures with brush & ink. We were joined by local singer Kelly Colbert in a performance where each of us crossed over our boundaries of movement, voice & drawing. (Actually, Kelly & I didn't do any drawing!)

Sacred Dance Guild Festival
I had the privilege of being on the faculty for the Sacred Dance Guild's 50th anniversary festival, held at Connecticut College. I led a workshop entitled “Motion Sculpture: Movement Installation as Divine Meditation”. The participants performed as part of a Labyrinth walk (designed for meditation, prayer & reflection). Many of the Labyrinth walkers began to interact with us & afterwards commented on what a powerful & peaceful presence we brought to their Labyrinth experience. Throughout the festival, I also practiced random acts of Motion Sculpture, appearing in various costumes, times & places around the campus - that was fun!

Canada
After that was a hop across the border to Canada. First stop Ottawa, where I'm adjunct faculty at Dance Space 637, run by Natasha Royka (we met as roommates at Jacobs Pillow dance festival 10 years ago!)
HerbFest
My first event there was my 3rd “HerbFest” at The Herb Garden in Almonte. an annual all day family event including vendors of everything herb, chef demonstrations & entertainment. I re-worked last years “Marigold” character with the addition of “Butterfly”, danced by Madeleine Jullian – and we flowered & flitted our way through the Herb Garden all afternoon!
From The Soul
Next was my fourth annual “From The Soul” project. Workshop sessions at Dance Space 637 culminating in a presentation on the Ottawa river at Remic Rapids Park with the stoic rock sculptures of John Ceprano. John pulls up huge rocks from the river bed & gives them a new life as art! This years “From The Soul” was entitled “MELT” - an exploration of the cycles of construction & deconstruction of the human psyche. In the workshop sessions, we focused on movement portraying concepts of deconstruction; melt, dissolve, disintegrate, crumble, fragment. Then developed ideas of building new structure. Uncannily, John's sculptures seemed aware of the subject theme & some of them decided to dis-assemble themselves during the performance! - This has never happened before!
Toronto
Then I was on to Toronto to perform improvized collaborations with some of the city's leading experimental musicians. At “Somewhere There”, guitarist Ken Aldcroft organized an evening with two other musicians – Allison Cameron, playing objects such as toy instruments, & Jean Martin on percussion. The next day, I went to “the island” (accessible only by ferry) with Shakuhachi flute player Debbie Danbrooke, who had been one of the SDGF musicians. We did some “guerilla performance” in the park there before going on to perform at a lovely event in a private garden, arranged by guitarist Michael Keith.

So often I find that these private “Salon” soirees are the most fascinating occasions, quite intimate gatherings of the most kind, warm-hearted, interesting, intelligent, eccentric folk ! They seem to harken back to the old fashioned “parlour gatherings” & could be the way of the future in this day of artistic budget cuts!
Thank you for reading my newsletter. I would love to hear from YOU.
Please stay in touch & check my calendar for up-coming events.
www.cillavee-lifeartscalendar.blogspot.com